Well, this was an exciting weekend! On Saturday, I helped with a Technique Make and Take at the Scrapbook Village. I was showing some ladies some tips for using transparencies when my phone rang. Usually when I'm busy, I don't answer my phone. This time I did, thank Heavens. It was a very nervous Phil calling me to tell me that he was taking Ethan to the ER with a hole in his head. Apparently he had been sitting on a gate which opened (go figure) and caused him to fall on the cement sidewalk. (Later Ethan informed me that he had climbed onto the garbage can to get onto the gate to use a broom handle to pound a pipe that was on the roof.) 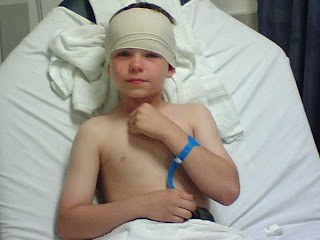 By the time I got to the ER, his head was already bandaged after getting 3 staples. He was most impressed by his hospital bracelet. He said, "Look, Mom, they called me ED." I said, "That stands for Emergency Department." Oh.
By this morning, the dressing had fallen off. He showed his staples to nearly everyone in church. He was a big hit with all the kids!
My sweet husband is simply the best. He doesn't much care for blood, and because I wasn't home, he had to handle this whole thing by himself. He stopped the gushing coming from Ethan's wound, dropped Sammy off at my mom's, and got Ethan to the ER. Phil rocks.
The boys only have 13 days of school left. Whoo hoo! I am one of those strange moms who actually looks forward to the summer.
Posted by Laura at 7:40 PM 1 comment: