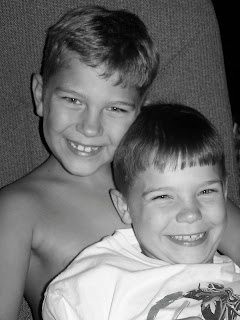 It's hard to believe, but this little boy turned eight today! He's actually been celebrating for the last three days! On Saturday, he invited four close friends to a pool party. They had a blast! Phil had taken the day off from work, so he swam with them.

Then we had my family over to celebrate. We watched baby videos, he opened lots of G.I. Joe stuff, and we ate a dinner of his choosing: chicken sandwiches, corn, and tater tots (okay, the corn was not his idea- I just try to get veggies in them whenever I can). He also requested apple pie instead of cake. I knew my brother and Sammy wouldn't eat pie, so I also made brownies. While Sam and Ethan played with the new toys, the rest of us giggled at the home videos. These boys were such dolls!

Then he got lots of birthday attention yesterday in his Sunday School class. He tried talking me into letting him open a present from us early. I declined.

First thing this morning, after I made his requested birthday breakfast of monkey bread, he was ready to open his gifts. We surprised him by getting a Nintendo DS and a couple of games. Our boys have never had any type of game system, so this went over pretty big. He and Sam took turns with it all day. I told them they could have a day or two of unlimited use, but then we'll have some time limits (I know, I know- veggies with your b-day meal and time limits on video games- what kind of mom am I?!)
Posted by Laura at 8:43 PM No comments: